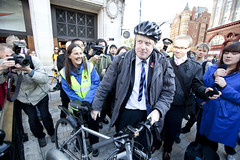 Chatter aplenty today about the Bounty of Boris: the Superhighway and the cycle hire scheme. Boris’s great contributions to the city in his first term as The Mayor Of London (why all those caps?). Both schemes have their detractors and they are certainly not without their shortcomings. However, we must recognise that these are special times for cyclists in the capital.

Thanks to Boris cycling jostles with heavyweight issues at the top of the political agenda. It gets a disproportionate amount of media coverage and it’s cool factor continues to grow. Admittedly the last point is not BoJo’s doing but his endorsement has been vital in bringing the bike back to the masses as a form of public transport.

However, it is vital that in times of boom (don’t we know this?!) that we make hay. And it is accordingly vital that the schemes being rolled out are valuable, sustainable and make an enduring difference. We’re certainly looking forward to rolling out on some blue tar-mac and test driving the new Boris Bikes and will hold fire on any judgments until we have done so.

Bikepedia ( Not live until July 20th )

London is flat is it? Try leaving the central bit. No matter which directio
Ann on the hill on Cycling in London

Great article! Totally agree, but might also add Having A Thick Skin, to cope wi
Corin on What does it take to be a top Cycling Commuter?

David - thanks for your comment and glad you are interested. I'll update the pos
admin on Cycling in Thailand

Oh, I was expecting to read more about the Thailand trip! Where did you go and
David McReynolds on Cycling in Thailand

Going Going Bike - in the news

Why don't you BIKE OFF!

What does it take to be a top Cycling Commuter?